Whale hunting represented an important share of Chilean industrial development during the first half of the twentieth century. Today the site’s ruins bear witness to the dimensions of this former industry.

The name “Quintay” comes from the Mapuche, meaning, “vessel delivered to the wind.” Its fishing history goes back to pre-Columbian times.

The Quintay Whaling Station, built by the INDUS Company and inaugurated in 1943, was the largest in the country. English and German engineers participated in the station’s construction. Miners from the Andes Region were brought in to fill in the space between the islets where the foundation of the Station would be laid. Some 700 to 1000 people worked in three shifts, year round. Very few residents of Quintay participated in this flourishing new industry, but instead continued to practice their artisanal fishing. 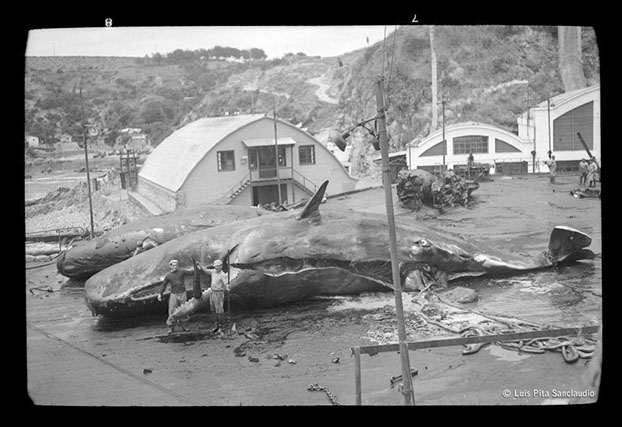 The Whaling Station operated until 1964 supplying the local markets with oil, grease, soap, combs, detergents, meats and other products. Between 1964 and 1967, under Japanese administration, refrigerated ships were used to produce meat that was then taken to Japan where it is very appreciated by its people. During this period, 13,700 whales were killed, including 1,000 blue whales. 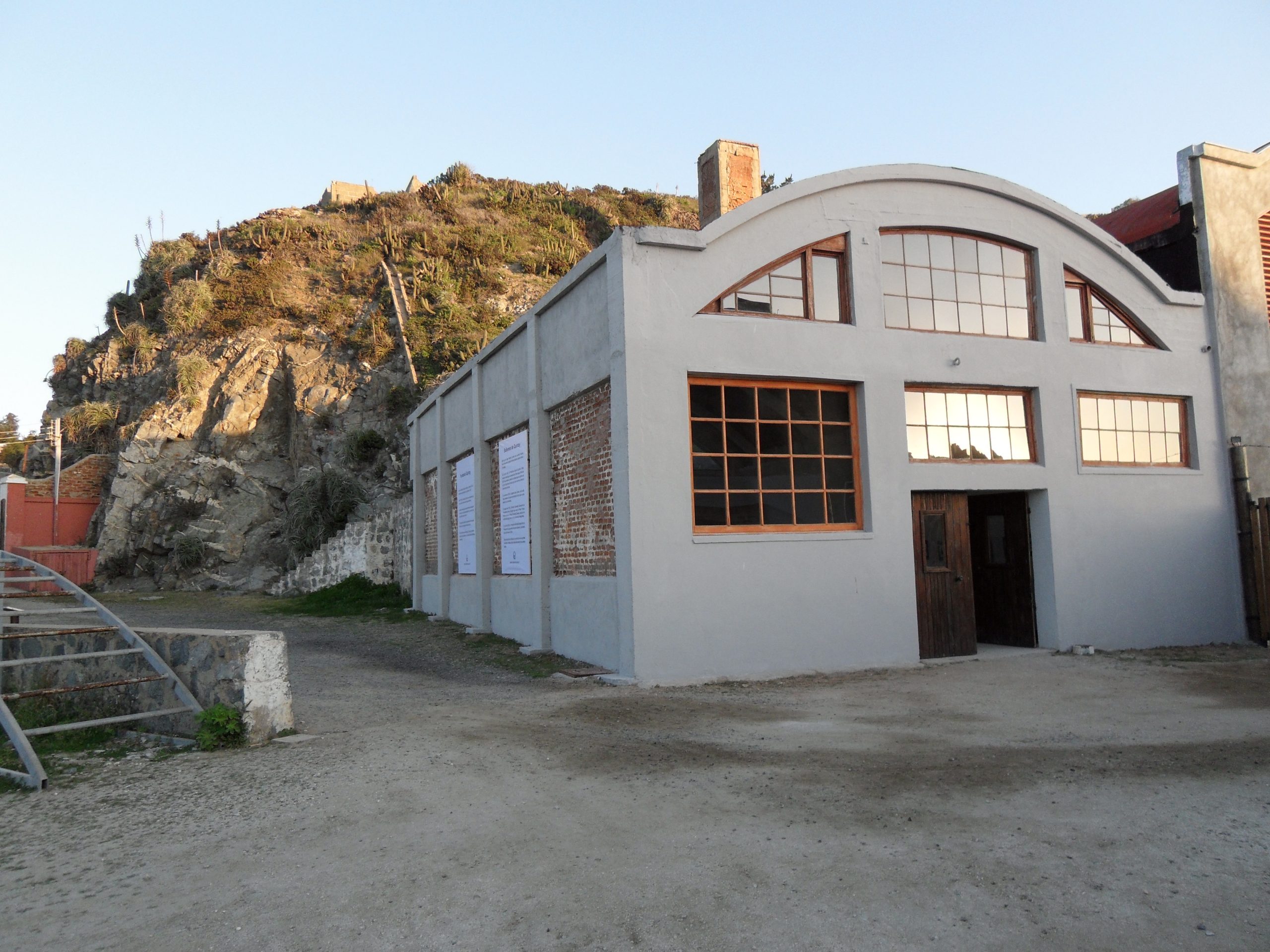 Some residents of Quintay made up the Foundation in 1997. It is important to note that the place of the old Whaling Station was completely abandoned and entirely plundered. The Foundation received the Whaling Station as concession of the Chilean Government with the aim to transforming the ruins into a place of information and promoting the protection of marine animals and the coastal ecosystem. Our objective is to recuperate the forgotten history of the local whaling industry and to awaken environmental consciousness, to hopefully make people aware that this rich natural resource needs care, investigation and sustainable management.  In August 2015, the Government declared the Whaling Station as “National Historic Monument”.

Whales are iconic and attractive species that have captured the imagination of humankind since time immemorial.  The exhibition illustrates literature and poems of different centuries and cultures. 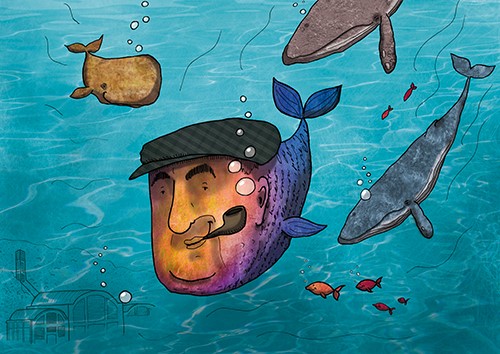 Exhibition site 2:  The history of the Quintay Whaling Station 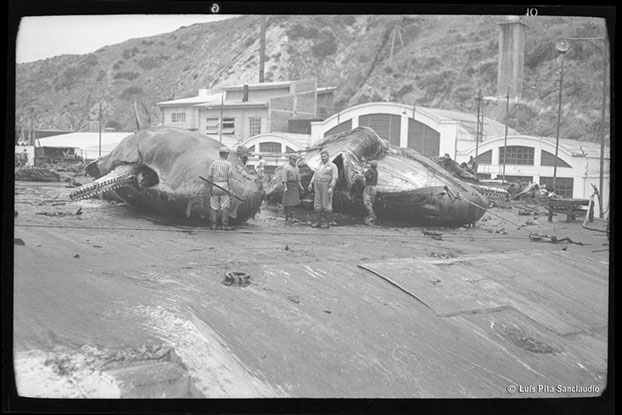 Early in the 19th century, whaling began on a grand scale in Chile when the first whaling ships passed from the Atlantic to the Pacific around the feared Cape Horn. However, the Chilean national whaling industry did not reach its peak until the 20th century after the invention of a series of technical devices such as the explosive harpoon that was shot from a gun on the prow. A harpoon, recently found on the bottom of the sea, is shown in the gallery.

The INDUS Company was comprised of 7 whaling boats ranging from 51.000 to 81.000 tons in size. In the middle of the gallery you see the replica of a whaling boat:  the INDUS 7.

The exhibition “Una mirada personal “- “A personal view” gives an intimate insight of a Spanish immigrant about life in Quintay at the early 50th. The personal photos enlighten the working and living condition and the atmosphere in Quintay at that time.

A documentary, filmed in 1958 by the company itself with a professional team demonstrate whaling on board of one of the INDUS fleet ships. There are shocking scenes from this activity. Panels that tell the “History of the Quintay Whaling station” from its beginning in 1943 until its closure in 1967 complement the film. It explains to the public the different areas of work from hunting to the sale of products for the national market. 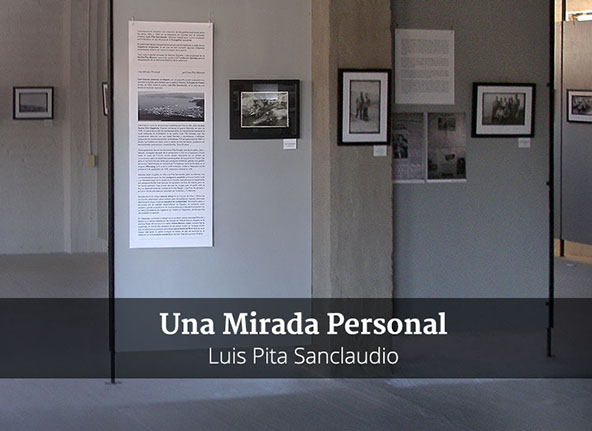 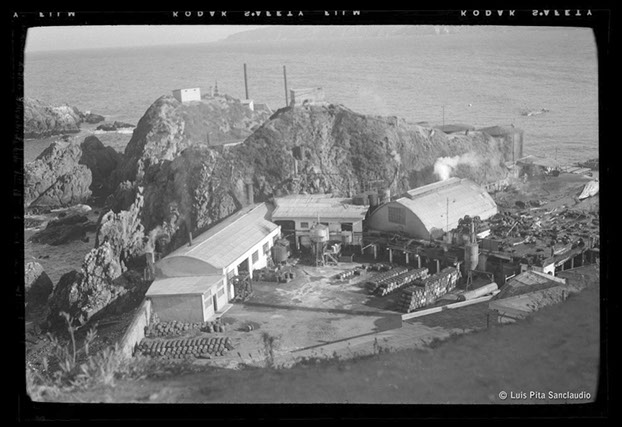 Exhibition site 3 “Cetaceans: from the land to the sea» 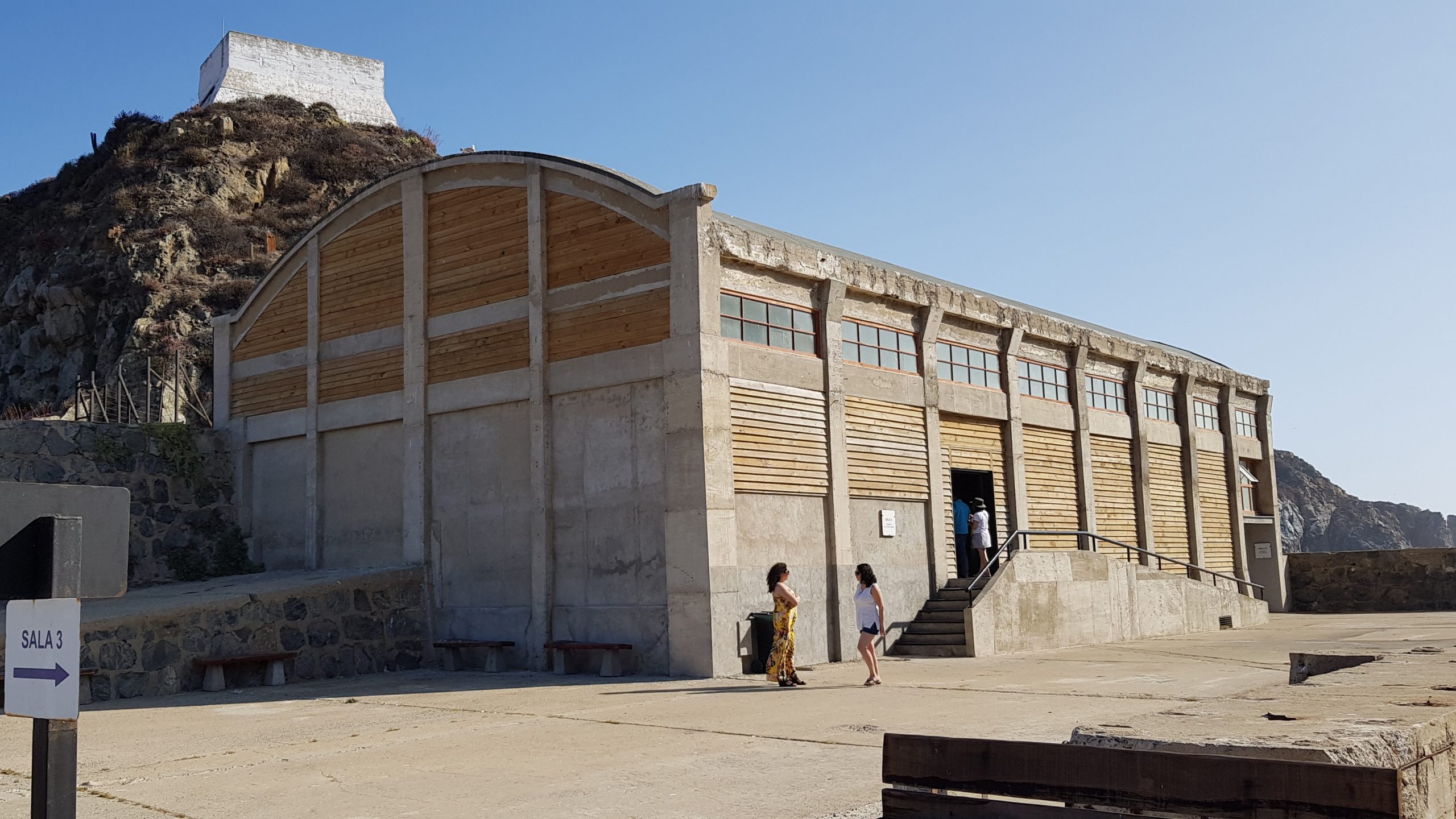 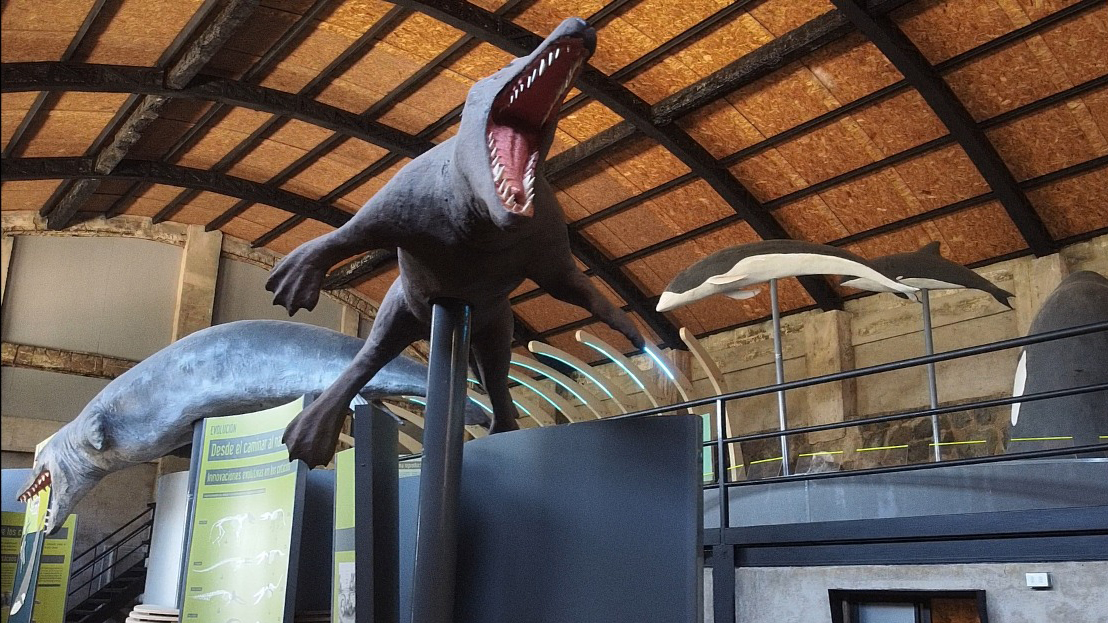 We recovered this building in 2018 from a decrepit state and it has been our greatest work of heritage recovery. The work was carried out with the aim of giving a place to the itinerant exhibition «Cetaceans: from the land to the Sea» created by the National Museum of Natural History of Chile (MNHN) in 2017. After its exhibition in Santiago, Valdivia, Coyhaique and Punta Arenas it reaches its last itinerancy here in Quintay.  Through a collection of original pieces and recreations as well as audiovisual media, the exhibition describes the evolution of cetaceans from primitive mammals to current marine mammals, considering their changes in size, behavior, anatomy and their relationship with the environment.

Exhibition site 4 «The path of the whale»

The site is a large semi-underground room in the same building dedicated to audiovisual projections.  Presents a series of educational videos donated by the Meri Foundation and the MNHN. This room also serves for temporary exhibitions or meetings of our collaborators on coastal protection issues. 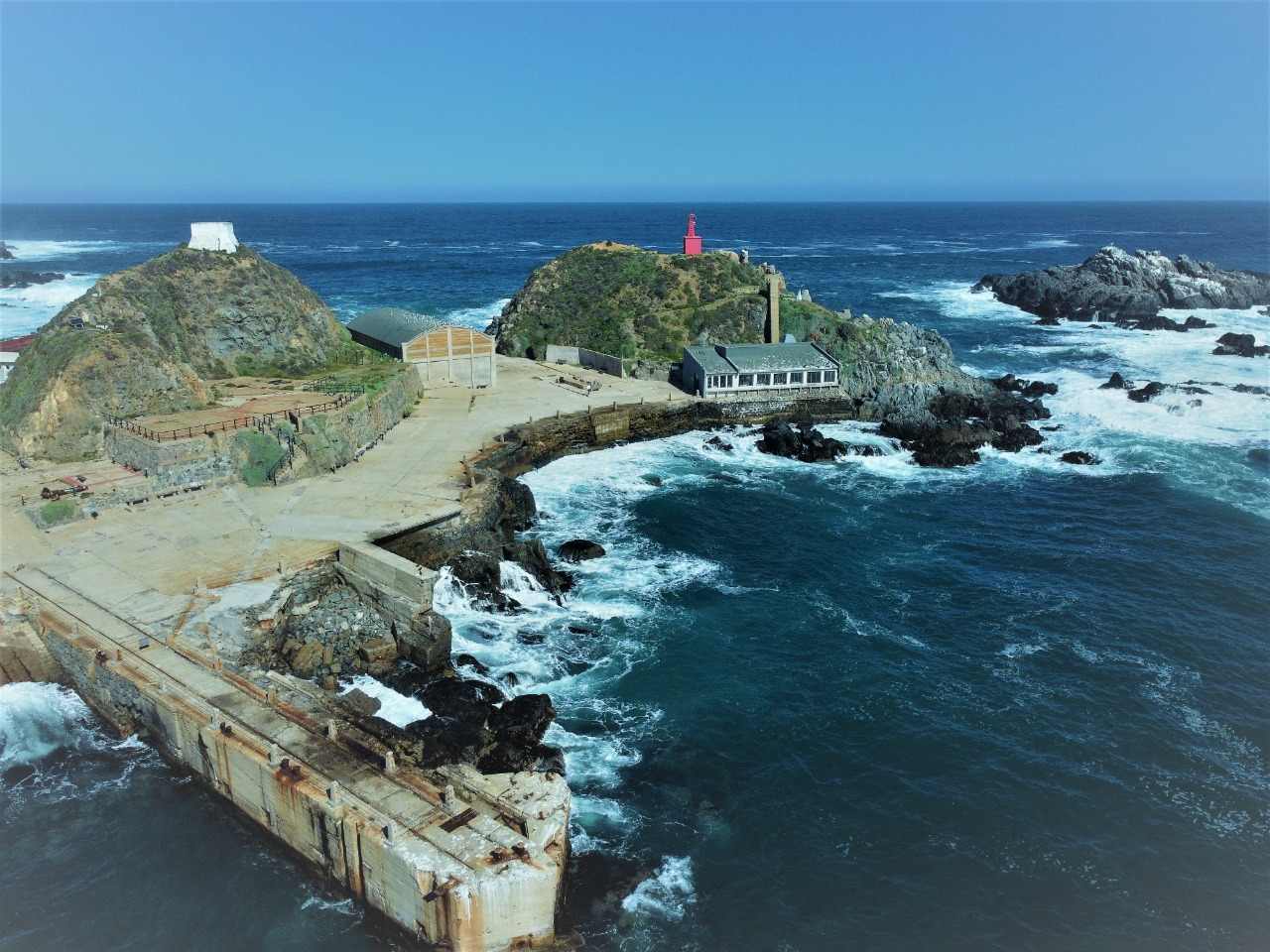 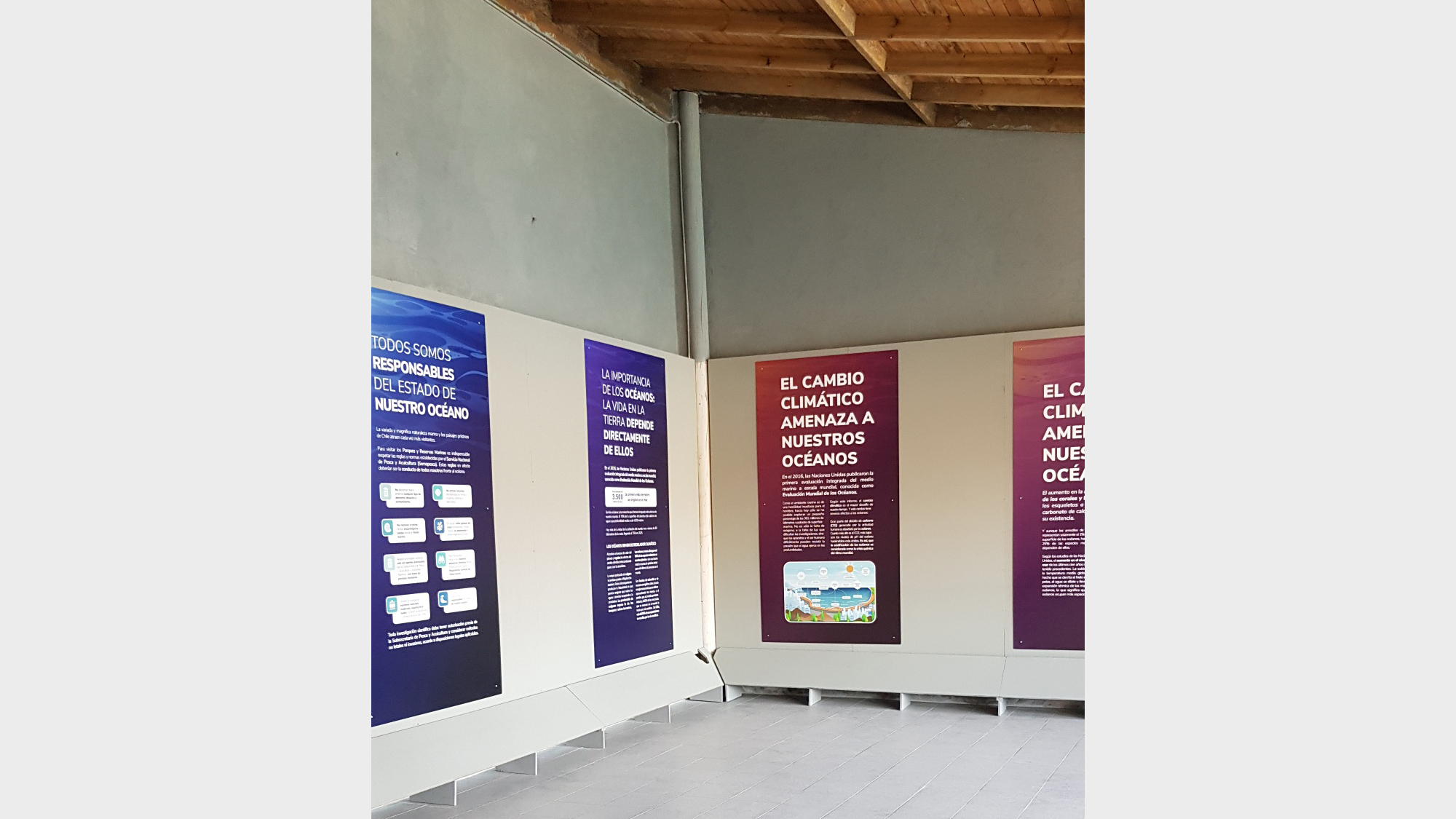 We end our walk in the last building whose motto is «Marine protection and conservation strategies «. The panels and videos show the global challenges in protecting the oceans and the public policies and actions carried out in Chile. The creation of the marine parks whose decree was celebrated in 2003 in the Quintay Whaling Station as well as the benthonic resource management areas whose first experience was made with the repopulation of the loco in the bay of Quintay stands out.